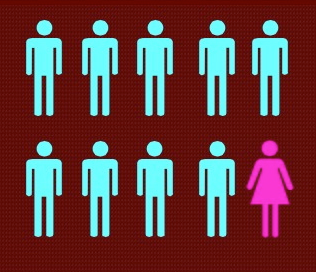 Some people think women have it easy in the music industry.

One guy recently informed me that it’s easier for women to get gigs in audio.  I questioned that statement, and my research brought up some interesting information.

I discovered this website called MEOW Online (Musicians for Equal Opportunity for Women) that has some really great info and encouragement if you’re a woman in the industry.  Regardless of your gender, I would definitely recommend visiting the site here.  I discovered the site when I stumbled across this graphic, which really gives you a sense of the climate of this industry:

This really made me think.  From my experience, the industry culture really grooms you to feel like you’re whining or exaggerating if you feel like things are tougher for you than for your male peers.

But if you look at the statistics, the gender gap in this industry is clearly still a problem.

So I’m going to politely disagree with gentlemen that argue that we have it easier.

There are days when this doesn’t bother me, probably partially because I’m doing well compared to most.  But I can corroborate this information.  As a disclaimer, I love and have no problem with most of the studios I’ve worked in during my career.  But some have downright shocked me.  I’ve personally been passed up for promotions that were given to male peers that are less educated, with less experience than me (and definitely don’t have the grammar and marketing skills that I have to boot).  The most recent time, I asked for, but was never given, a logical reason for the decision.  Apparently there was some cursing about who’s “F-ing studio” it is, and I was told not to push the subject if I valued my unpaid internship.  I’m one to believe that if you can’t articulate a logical reason for your decision, then you probably don’t have one.

I know it isn’t right, but I don’t know how to fix things as a 20 something starting out in the industry.  I see studios make risky and often highly illegal decisions all the time.  When I add that to all the illogical business decisions that I see made on a regular basis, I wonder how they survive.  Sometimes I want to call the guy from The Profit on studios (if you’re an economics and business nerd like me, you’ll love shows like The Profit).  But we’ve somehow arrived in a culture where those that are successful – i.e. on the privileged side of things – oftentimes don’t stand up for the rights of the underprivileged.  We even have legal precedence to protect us.  But even with all the interns winning lawsuits in LA, few people are actually using the law to protect themselves.  Myself included.

So the question is: Where is the line?  What do you count as the last straw?

For me, it’s not a question of access to resources.  I’ve also seen enough and done enough research that I’m confident that it’s not even a question of whether I could win.  It’s a question of risk analysis.  In such a social industry, at what point is it wise to risk burning bridges in order to make a point and push for change – for yourself, and others just starting out?

Does anyone out there want to start a conversation about this?  Message me, or contact me using my contact form.

Here are some more resources for women in music:

International Alliance for Women in Music

Women in Music with Laney Goodman